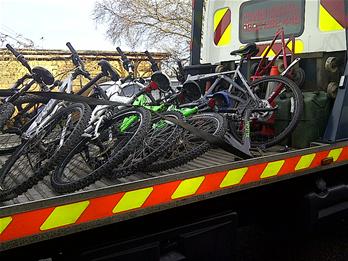 If you had your bike stolen in Northampton you may well be in luck, 17 bikes have been recovered in a single raid on 3rd January 2013.

TWO men involved have been arrested on suspicion of stealing pedal cycles after Safer Community Team officers in Northampton carried out a warrant at an industrial unit.

The officers from the Northampton South-West SCT raided the unit in Ransome Road and seized a total of 17 bicycles and two bicycle frames, along with 12 bicycle wheels.

Two men, both aged 32 and from Kingsthorpe, Northampton, were arrested and are presently in custody at the Criminal Justice Centre.

Inspector Jen Helm, from Northampton’s South-West Sector, said: This shows what you can do with a small group of officers who have local knowledge and support and who feel a real responsibility to the part of the county that they police.”

Officers are currently establishing the details of the bikes and will be in contact with owners where possible, in the case of any bikes where ownership cannot be established then they will post details on their website.