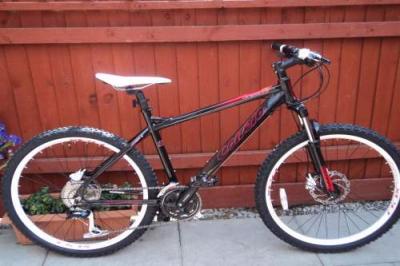 black & red,with white wheels with red writing on them.the seat had beed changed to a black gel one.the seat has gel written in red on the side.it also had a rear mudgaurd.there is also slight signs of overspray on the frame & seat where i forgot to move the bike out the way when painting another.this would be hard to remove.the frame is fitted with a police tag & there was a sticker on the frame saying this although that would proberly of been removed.the first picture i have uploaded is the actual bike before i changed the seat & fitted a rear mudgaurd.the other pic is what it will look like now.i have drawn on the mudgaurd & blacked the seat out.to give you an idea.there is a few chips in the paint along the top of the crossbar