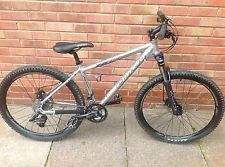 Silver Carrera Kraken ladies 18" mountain bike with pink writing.  The bicycle was locked up in a brightly lit car park on the evening of Saturday 15 June 2013 and was stolen some time between 20:30 and 00:30.  The bike has a gel ladies saddle but obviously that saddle may now have been changed.  There was newly fitted clip on the handlebars for a removable light and the new rear light was fitted to the seat column (they have both probably now been removed too).  The bike was 2007 but was "as new", having been out and about very little, but it was in very good order and had been well maintained mechanically.  The bike could be anywhere by now, it was the weekend of the Isle of Wight festival with many visitors to the island.  But I think it was stolen by a local because of the fact that the lock must have been cut through - what average festival goer carries such an implement in their rucksack???

The bike is like the attached picture except the frame is silver and the writing is pale pink.