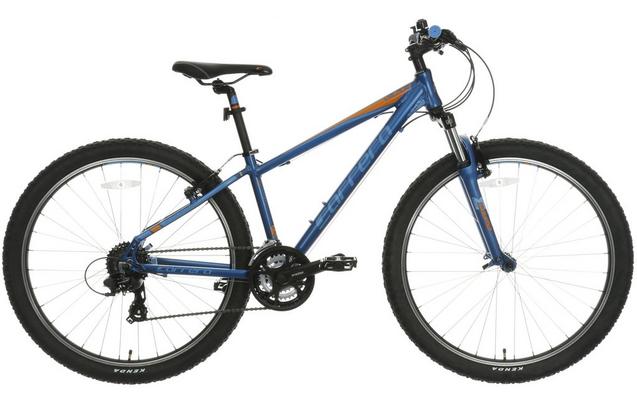 This bike was kept in Bangor (Gwynedd) North Wales, it was locked up.  Was stolen between 11pm - 7am (9th/10th August 2018).  It is a women's bike, it is about 2 years old however has not been used much therefore looks fairly new.  It is dark blue, alloy frame, with orange strikes down it, it also has the word 'VALOUR'.  This specific bike can be differentiated because it has no bell (it broke off) and has other various minor cosmetic damages.  It is 14 inch frame, and even had a little detachable light below the handle bars (although the thief may have removed this).

The bike was locked to a gate which surrounds the front door, this lock was a code lock and tied around the back wheel and frame.  I arrived home around 9:30pm 9th August and it was still there but by 7am 10th August it had been stolen (very small time period).  The bike was covered in a brand new bike protector, however the thief did not take this.  They did take the lock, so I am unsure if it was opened by guessing the code or if it was cut off, most likely the latter.  This has been reported to North Wales Police.