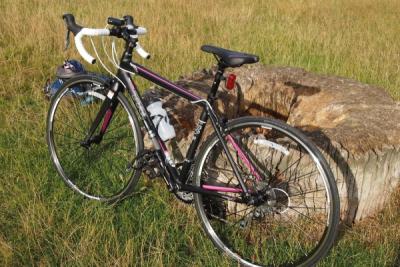 Bike was stored in a storage metal cage, in the underground car park at my block of flats.

It had 2 locks on, one combination cable, and one Abus D-lock, securing the bike frame and wheels to the bicycle rack. The cage could only be accessed using a key fob, which each resident has. There was no forced entry, meaning someone used a stolen/lost key fob, or was in fact a resident of the building.

The combination lock was cut, and the quick release wheel mechanism used in order to remove the frame and front wheel. The back wheel was left behind with the D-lock, and the cable lock on the ground. Several bikes were stolen on the same occasion, and others had their wheels taken. CCTV does cover the car park.

The bike was last seen at the weekend (1st-2nd), and reported stolen approx 7:30am on Tues 4th November.

The police arrested the thief from CCTV images, who admitted to selling the bike to Cash Converters. They were able to go to the store and recover it along with the other bikes that were taken at the same time.