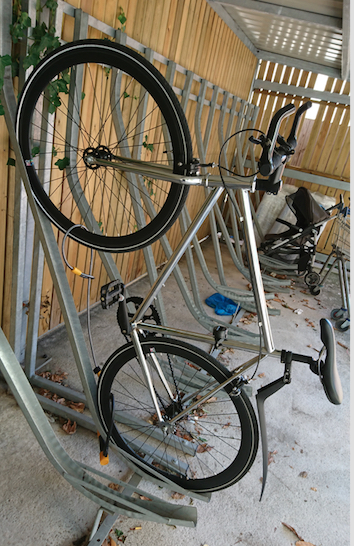 Bike was stolen from locked bike shed (pictured) which usually needs an RFID fob to access. The thief had broken the lock on the door and taken the bike and the D-lock as well. 2 other bikes were left behind. It is not known if any other bike was taken. The theft happened the night of the 18th of August after 10.45pm when I still could see the bike in the shed as I was entering the flat building. I realised that the bike was gone at 10.20am the following day when I went to the shed. This is the second bike I had stolen in less than a week. The first bike was also put up on this site: https://stolen-bikes.co.uk/stolen-bikes/fuji-sportif-2-3-2/

The local Met police PCSO contacted me saying that the bike had been recovered soon after it was stolen. Upon collection I was told that it was abandoned not far from it was stolen and a police officer had picked it up. The thief may have panicked when they saw the officer and ran off without the bike. The bike was recovered in a good condition with some scratches and scuffs as well as mud on the handlebar when it was abandoned.