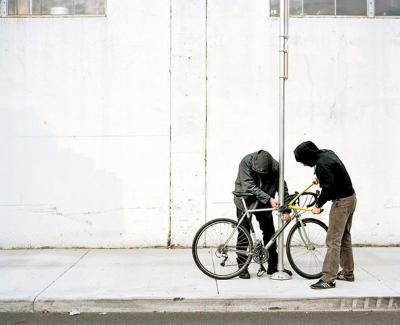 I’ve found an interesting article on Outside Online. It describes the experiences of one cyclists over many years (and many bike thefts), of a cyclist trying to understand the bike thieves mind set.

The most interesting part of the story is when the cyclist does catch up to a bike thieve  he doesn’t find some drug popping addict, but a homeless man with some pretty clear mental problems.

The author explores the concepts from prevention, the act, to the “online obituaries” sites like mine can become.

Quote from OutsideOnline.com – Who Pinched My Ride?

“This past year, Kryptonite introduced a system of supposedly tamperproof security stickers, which can be scanned with a cell-phone camera for instant ownership checks. It’s a fine idea, but in our tests the stickers came off with a knife.

Maybe catharsis is all we have. YouTube is awash in surveillance-tape dramas like mine and patiently filmed revenge scenes, in which bike thieves are caught, busted, beaten, set up, tricked, shamed, and exposed, but it’s all to little or no avail. We are left with missing bikes and unlimited rage. Bike mechanics in Brooklyn can be found wearing T-shirts that read BIKE THIEVES SHOT ON SITE. It’s entirely possible that last word is misspelled.”

The articles quite long but it’s a good read so I recommend it! Oh and we will hopefully be trying our own UK brand of poorly locked GPS enabled bikes.